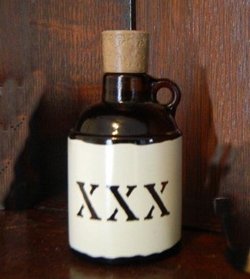 Hard-core NASCAR fans are probably already aware that their beloved sport goes back to the bootlegging days of the 1920s. Good ol’ boys with names Cooter and Hoss were just trying to make a living so they modified their cars in order to outrun the cops on those midnight moonshine runs. Many of the earliest names in the sport were former bootleggers, including the famous Junior Johnson. Johnson had already spent a year in prison for operating an illegal still when he made the transition to NASCAR in 1955. He would go on to win 50 races, retiring in 1966.

Why Moonshine is illegal to make

The reason is simple. The government might be mildly concerned with the health of people consuming bootleg liquor, but they are far more concerned with their checkbook. Spirits are taxed heavily. In some states, these taxes are in excess of $20 per gallon and a huge government monkey-maker. According to The Economist, the state of Virginia alone loses $20 million in annual revenue.

Who Was Popcorn Sutton?

Moonshiners by their very nature are a cagey sort, living under the radar. A notable exception to the rule was Marvin “Popcorn” Sutton. The nickname came from an incident in his youth when the notoriously short-tempered Sutton destroyed a popcorn machine with a pool cue. Popcorn Sutton was perhaps the world’s most famous moonshiner, operating stills in Maggie Valley, North Carolina. While he typically stayed one step ahead of the law, he’d been caught a few times during his decades-long career and did stints of probation. Popcorn appeared on several television shows, including Discovery Channel’s Moonshiners, and published an autobiography called “Me and My Likker.”

A raid by the Bureau of Alcohol, Tobacco, and Firearms on his property in 2009 netted him an 18-month prison sentence. Popcorn, who had recently been diagnosed with cancer, pleaded to be given house arrest instead, but the request was denied. Shortly before he was to begin his sentence, he committed suicide by carbon monoxide poisoning. The next year, Sutton’s dubious legacy was celebrated when country star Hank Williams Jr. teamed up with his widow to bring “Popcorn Sutton’s Tennessee White Whiskey” into distribution.

What is "Bangin in the Woods?"

At the Dawsonville Moonshine Distillery in Georgia, corn whiskey's made from a 150-year-old recipe passed down from an overall-wearing moonshiner by the name of Simmie Free. His granddaughter, Cheryl Wood, opened the north Georgia distillery in 2012, turning an illegal family business legit. Use Wood's moonshine instead of vodka to put a country spin on Sex on the Beach. She calls her version of the classic cocktail "Bangin' in the Woods." I prefer to sip it neat, and slowly—this stuff packs a punch! It's got a nice caramel scent, and a taste like cornbread in a jar.

What's the difference between Shine and Whiskey?

Moonshine is not aged. Actually, if moonshine was aged, it would be whiskey! Both moonshine and whiskey start out the same way. The difference is that whiskey is aged in oak barrels that are charred on the inside. This adds the color and gives it a more subtle flavor. Meanwhile, moonshine is made quickly, remains clear, and has a signature kick.

During the prohibition era of the 1920s a scholar was hired by temperance activists to rewrite the parts of the bible that referenced alcohol.

For the Scottish and Irish farmers who settled in Appalachia in the early 1700s distilling whiskey was more than just a means of getting drunk - though it certainly helped. They used homemade alcohol as a medicine, a disinfectant, a tranquilizer, an anesthetic, a solvent, and also currency.